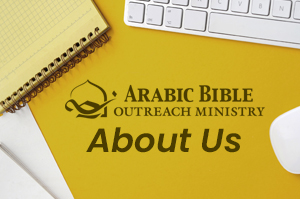 The Challenge of Islam

The Islamic world, especially the Arab world, is searching for an answer to all the tyrannies sweeping the Islamic Umah (empire). Many Muslims feel ashamed of the past few decades and want to show they can do better. To do that, they need to rediscover a sense of identity. Many are turning back to the Quran (the Muslims’ holy book).

As a result, a revival is taking place in the Muslim world — a return to their roots: Islamic Fundamentalism. The New Testament Church needs to respond to this challenge and seriously apply our Lord’s Great Commission to the great spiritual need of Muslims.

May the Lord of harvest raise up laborers for the Arab field and lead His people to reach the Muslim world!

What Is Our Purpose?

To glorify God by proclaiming His Word through the internet to the unreached peoples of the Arab and Muslim world.

We glorify God by embracing His passion for the unreached in the Arab and Muslim world.

It is our firm belief that God has allowed a new and powerful medium of communication called the internet for the sole purpose of reaching the unreached in the Arab and Muslim world. We commit to work deligently using all the tools provided on the internet to win lost souls and establish believers in the precious faith.

- To strengthen and encourage the establishment of reproducing churches

Christ is building His Church. He calls us to evangelize and disciple people from every nation so that they become part of His Church. As part of the royal commission, we intend to produce and post Biblically sound material in our quest to strengthen new believers in the faith and provide Biblical tools to fellow brethren laboring in the Arab world.

The Arab world, with a population of 380 Million, is the heart of the Muslim world. Our target and focus is the Arab world.

- To proclaim the Gospel of our Lord Jesus to the lost.

- To disciple those who believe in the precious faith of our Lord Jesus Christ.

- To plant churches in the Arab world and North America.

- To raise awareness of the spiritual needs of Muslims among Christians in North America.

Please see article below for complete statement of faith.