The Mt. Sinai Arabic Codex 151 is indeed a most exciting discovery.
It appears to be the oldest Arabic translation of the Bible in existence which was done in 867 AD. It is certainly the oldest Arabic translation with commentary supplied by the translator. It includes the Biblical text, marginal comments, lectionary notes, and glosses, as found in the manuscript. It was discovered at St. Catherine's monastery in Mt. Sinai in the 1800's.

This ancient and important Arabic manuscript is published in one volume by the Institute For Middle Eastern New Testament Studies, edited by Dr. Harvey Staal. The volume is a presentation of the manuscript, preserving all the marginal notes and its intrinsic value as much as possible. Dr. Harvey Staal, a missionary of the Reformed Church in America, labored for years on the transcription and publication of this Arabic manuscript. This discovery is a thrilling discovery for Middle Eastern Christians, because it demonstrates that more than a 1100 years ago, an Arabic Christian translated God's precious word into our Arabic language, complete with notes and comments!

NOTE:
Dr. Staal passed away February 1999. Only a few copies remain from first printing and these are handled by the Bible Society in Beirut, Lebanon. The email address is: .
The more requests they get regarding availability, the more they will realize the need for a second printing. Please email them and kindly petition for the re-print of this valuable volume. 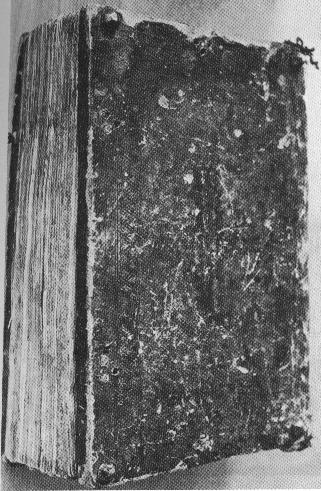 
The following is a scanned picture of the first chapter of Hebrews with its marginal commentary. 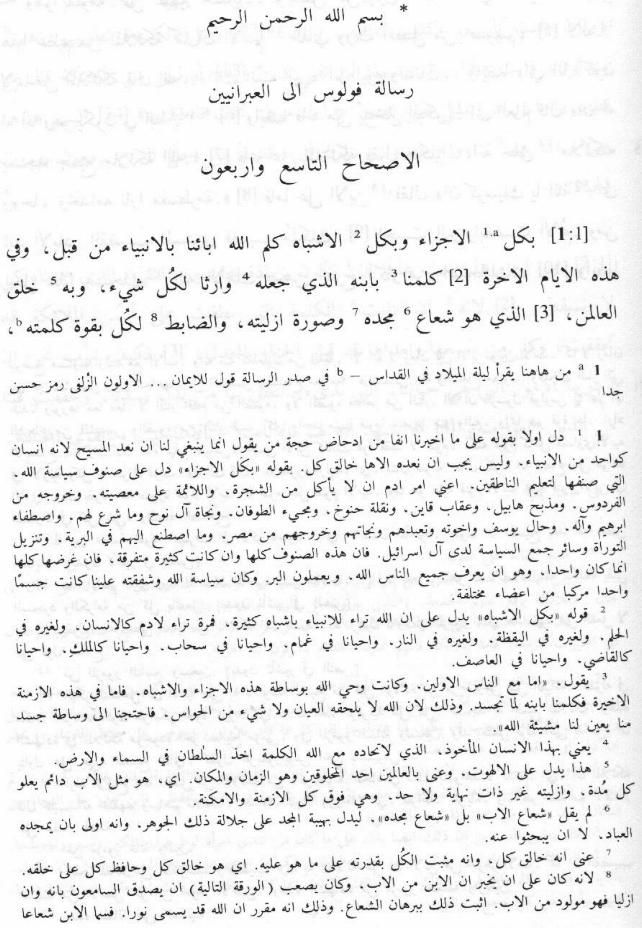 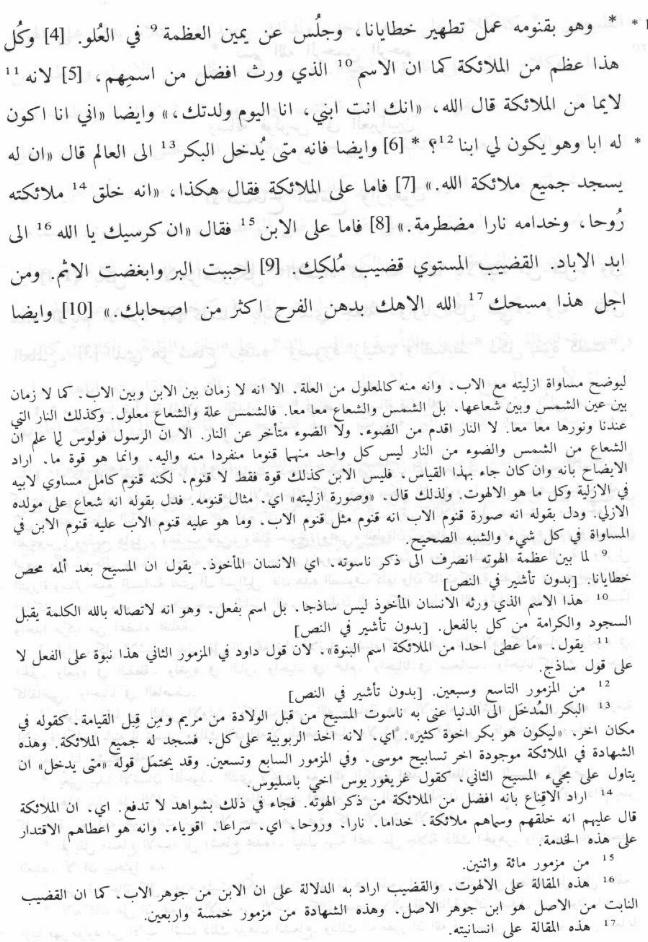 At the southern tip of the Sinai Peninsula, in the wilderness which separates Egypt from Israel, there is an ancient monastery, St. Catherine's. Its library contains thousands of precious manuscripts, all waiting to be explored. These manuscripts now have been microfilmed by a team of experts and are easily available from the Library of Congress in Washington, D. C.

When Dr. Harvey Staal, Reformed Church missionary to the Middle East, was taking advanced Arabic at the University of Michigan in order to get his Master degree in Middle East Studies, one of his professors was Dr. Aziz Suriyal Atiya. Prof. Atlya was closely associated with the microfilming of the manuscripts which was completed in the 1950s.

Sensing that he had a potential scholar on his hands, Prof. Atlya encouraged Harvey Staal to obtain one of these important manuscripts and to translate a portion of it. He recommended Mt. Sinai Arabic Codes 151 because it was dated (A.D. 867), it had the name of the translator (Bishr Ibn Al Sirri), and it gave his location (Damascus). Dr. Staal began with the book of Philippians at that time.

Thus began a lifetime project which culminated in the publication in 1985 of the manuscript in a two-volume work (one English and the other Arabic). Printed in Louvain, Belgium, the new volumes are part of a renowned series of Christian Oriental texts. This impressive and
masterly work covered 1,800 pages of typed manuscript, and the final proof reading was done in war torn Beirut. But that is getting ahead of our story.

The Mt. Sinai Arabic Codex 151 was indeed a most exciting discovery. It appears to be the oldest Arabic translation of the Bible in existence. Certainly it is the oldest Arabic translation with commentary supplied by the translator. The original manuscript was completed in Damascus, Syria, 1,000 years before the famous Smith-Van Dyck Arabic
Bible appeared in Beirut. It consists of all the Pauline Epistles, plus the book of Acts and the General Epistles. The Gospels evidently were done also but in a separate book. This manuscript volume is missing and may be lost forever.

Who was this Bishr Ibn Al Sirri? He was a Nestorian Christian living in Damascus whose work was done about 200 years after the Arab conquest of the Middle East. It is fascinating, therefore, to notice the vocabulary chosen at that period of time by this Christian Arab.

Al Sirri chose to start translating with the epistle to the Romans  (the starting point in missions to Muslims, as far as Rev. Bassam Madany is concerned). He also used language which would be easily understood by the Muslim, both then and now. This meant that the
Christian Arab community had not yet become ghettoized. With the polarization of Christians and Muslims ever since the Crusades  1095-1291, Christian Arabs have developed many terms and expressions which are purely Christian. This shows up all too often in Christian preaching and literature in the Arabic language.

In his introduction to the English text of Al Sirri's translation, Dr. Staal  makes the following observation:

This has been a most interesting, inspiring, and profitable study, especially from two aspects - word study and  interpretation. There are a number of translations of individual words that add additional insight to our  understanding of some of our basic Christian concepts.
It is also most interesting to read the comments made by Middle Eastern Christians of a thousand years ago, reflecting the theology of people from a cultural  background very similar to that of our Lord. We trust that some of this will carry over to you in the English translation.

There is something mysterious and exciting about the desert monastery of St. Catherine. When Dr. Staal visited there, he discovered that Mt. Sinai Arabic Codex 151 was a fascinating bound book of large size, with a remarkable cover of wood and leather. You could imagine, looking at it that it was certainly one of a kind (perhaps the only Bible in Damascus in A.D. 867).

Perhaps in a time of grave danger, some monk hid the manuscript volume under his cloak and walked the long rugged miles to this place of safety, where it has reposed ever since. St. Catherine's has had a reputation of safety for centuries. One look at the map and you will see why.

Those indeed were troubled times. This manuscript probably was deposited for safekeeping in the 1200's. As far as we know, it remained untouched until the microfilming in the 1950's.

Dr. Staal did not have to walk to St. Catherine's monastery. He flew to a small airstrip nearby. He was able to spend five memorable days there after completing his work on microfilm copies of the manuscript. What a thrill to see and touch and photograph the manuscript itself!!

In 1966, Harvey Staal decided to pursue his doctorate, again under Dr. Atlya, who had moved to the University of Utah in Salt Lake City. Harvey and Hilda speak of their two years in Utah in glowing terms. They enjoyed those years to America. Their children were able to attend school, and they experienced happy fellowship with the Christian Reformed people of Salt Lake City. His doctorate achieved, Dr. Staal continued his project in his spare time until he had completed the entire manuscript.

Dr. Staal recalls that he needed two hours to decipher just two lines when he first started on Philippians. It was like working with code. The dots which ordinarily distinguish various letters of the Arabic alphabet were omitted. Evidently they were not considered necessary for people educated enough to read the Bible !!!

For an example of the difficulty which this presented, consider that one particular mark ("stroke," in Arabic) like the bottom half of a circle could be taken for the letter "Isaiah," "b," "t," "th," or "y," according to where the dots were placed. The translation work became easier only after Harvey became completely familiar with Al Sirri's script. He speaks with great appreciation of the invaluable help of Dr. Jibrail S. Jabbur, of the American University of Beirut, who joined him in the labor of proofreading every word. Dr. Jabbur was able to help him greatly with some almost undecipherable words.

For personal Bible study, Dr. Staal's English volumes of this ancient manuscript would provide many new insights. It simply is a literal translation of the Arabic test. Here you have an interpretation of various passages of Scripture by a Christian of the 9th century A.D.
The translation into Arabic was made from the Aramaic, a language in common use in the Middle East for over 1,000 years - including the time that Jesus was on earth.

Dr. Staal is hopeful that more Arab scholars will avail themselves  of Mt. Sinai's hidden treasures. As he nears retirement, he is working on a very early translation of the Gospels from an Egyptian manuscript dating around the 13th Century. This time he has the help of an English-Arabic computer.

Considering the seriousness of the situation in the Middle East., the Al Sirri manuscript from A.D. 867 takes on great importance. It helps everyone to understand the tremendous roots of Middle Eastern Christianity. It should be a boost to the self image of Eastern Christians as they face eviction from such lands as Lebanon.

Shirley Madani served with her husband Pastor Bassam Madany at  the Arabic Broadcast -- The Back to God Hour. Please visit their site at Middle East Resources or email ,  You can also FAX them at (708)333 8592